November 02, 2007
Why? Many people [Burton group] who [Ian Glazer] are[Jackson Shaw] more[Dave Kearns] qualified[Forrester] than[Ian Yip] me have expressed their opinion on this subject. The main reason for the acquisition proposed - Externalization of Security Reading in to the fact that product has been placed in Collaboration Service Group and created a separate policy group, it looks like Cisco sees the product as a quick way to externalize the policy management from the various collaborative products. Another important aspect of these product (esp SaaS) is that security for these product is managed by End-users. Most of the web based application vendors (who do not sell security products) have been able to successfully externalize the authentication (support for sso, saml) and user repository (LDAP) but do not have a good model to replicate in the authorization space. If the result of this externalization of authorization across multiple application is successful, vendors will have a model to replicate. This will be a very big win for various enterprises that have been trying to drill this into vendor's head (James McGovern being one of them). But I think this is a tougher problem to solve than externalization of authentication and user repository (which are mostly one time job). I see the following problems Impressive Team and great execution I am amazed by how everybody has seen it as a complete technology acquisition and has not given enough credit to Cisco for investing into the team (may be they know something that I do not know about how acquisitions work). The complete team starting from Rajiv Gupta to their pre-sales team members have time and again been giving pretty impressive performance during various meetings with their (potential) clients. In addition to that if any body has been tracking securent over past 1.5-2 years, it is amazing how their sales and marketing team (biz dev) have taken a "would-be" space of authorization to a happening space and recreated a whole domain of entitlement management so much so that this year can aptly be said to be year of entitlement management atleast in terms of hype that was generated (I have never seen so many people clamoring to jump on to third-party entitlement bandwagon in financial services). I would really love to see this team take on a bigger challenges like Salesforce :) To me that could be a great reason in itself to buy the company instead of OEMing the product (beside the obvious reason that there is always the issue of OEMing from a small vendor which may be gone or bought by a competitor). What Next? Well looks like Securent is getting ready to be subsumed by Cisco and hopefully, in a year or two, we would have somebody from their team coming to burton group conference (or some other entitlement confrence) to discuss how their attempt to externalize the security from their collaboration software went and we all will have a good use-case to learn from. With the economy in US having a few hiccups and a possibility that SOX (one of the primary driver for various iam initiatives at this point) may be blamed for all economic problems, the info sec across the enterprises may be fighting a tough battle to get their company's entitlements in order (as soon as they get their user directory, authentication, provisioning in order). In addition to that the big vendors are expected to come out with new offerings in this domain which would make survival of new and existing company tougher. So, will we see a new startup in fine grain authorization space? I sincerely hope so and would love to see them grow and find a new niche in this space because as I see it the problems have just become tougher to solve.

Popular posts from this blog

May 31, 2005
Updated: November 12 2006 I am trying to come up with the list of vendors and associated products in the Identity and Access Management arena. Please note that this list is based on marketing/public information and my understanding of the terms which may not comply with any specific groups' definitions and/or requirements. This is by no means a complete list and will keep growing as I get more time to add them and find more companies (any help on that front will be really appreciated). Before we go further along, lets try to define what each of these product typically do so that my mode of classification may make sense or any flaw in my classfication will become apparant. Identity Management/User Provisioning These products typically provide the facility of Workflow-based Identity provisioning, password reset, identity reconciliation/discovery, delegated identity administration and self-service features on wide variety of identity platforms (like LDAP, Unix, Windows, Mainfra
Read more

September 06, 2015
This article is in continuation of the previous article. I started writing this long back but kind of left it mid way as the entire web SSO domain had matured at that time. Due to multiple reasons we have seen new generation of people entering the Web SSO domain. Keeping them in mind, it made sense to revisit this old post and update it with my thoughts and ideas. I do apologize for any inconsistency you may find between my last article and this one (given they were posted 9 years apart).
Read more 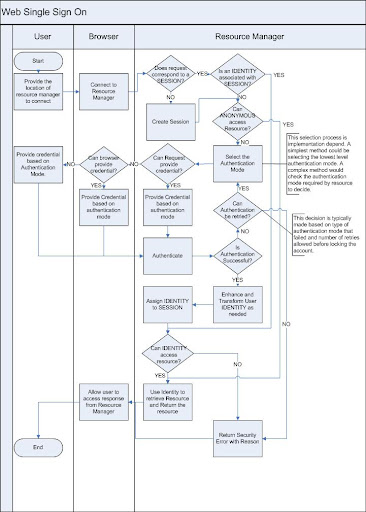 Update September 6, 2015: Part II in the series is now available . Update August 19,2006: I am rewriting this entry based on the methodology I am using for some of other domains. Hopefully, the new methodology would make it more useful to some of you. I talk to a lot of people from developer background who still do not have a good background in the IAM technology. Eventhough there is a lot of information on the web, I have felt a lack of good technological discussion on the various component that  actually form the IAM domain. Some of the good sources for the information on IAM are Microsoft Identity and Access Management Series Archie Reed Oracle Federated Identity Buyers guide Oracle Identity Management Buyer's Guide Identity Management Dissected Most of these document discuss the basic concepts but do not extend it to existing technologies and how it applies to them. This series is an attempt to look at the technology behind the Identity and access manage
Read more